Allison Rousseve and Jon Lewis fell into the same circle of friends as freshmen at Loyola University and they hung out together for years – yet they rarely spoke. They were complete opposites.

Lewis is an extrovert, always the life of the party. “Anytime there’s music playing, he’s the first one on the dance floor, singing and entertaining and making people laugh. He thinks he sounds like John Legend,” Rousseve says. 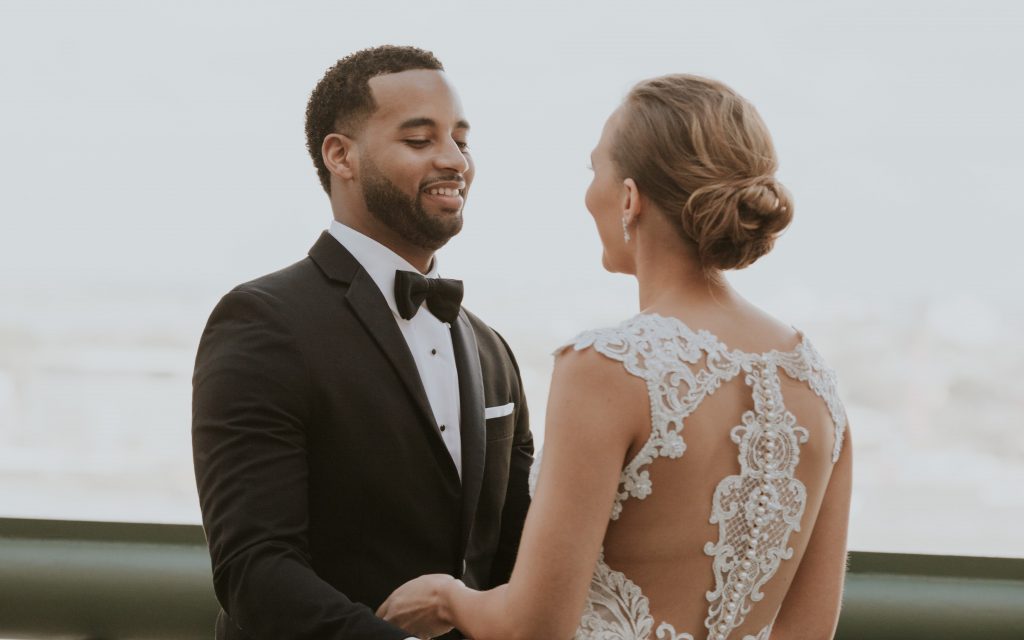 She, on the other hand, is an introvert, “quiet and shy,” she admits.

But one day during senior year, Lewis heard her laughing with a friend. “He realized, ‘Oh, she does actually have fun,’” Rousseve says.

Both had just ended relationships. They began talking about what they valued in a partnership: friendship first and communication.  They began dating before their 2012 graduation.

In October 2016, Lewis passed the Louisiana bar exam. He told Rousseve his boss at a local law firm was hosting a party to celebrate the achievement. The day of the gathering, Lewis seemingly disappeared. When Rousseve tried to call him, he didn’t answer his phone.

That was odd, she thought. Then things got more unusual. “Are you wearing your glasses or your contacts tonight?” her mother asked her. Her sister had the same question, adding, “Do you want me to do your makeup?” Rousseve’s parents also insisted on driving her to the party site on St. Charles Avenue.

There, Rousseve was ushered towards the pool area. Lewis was standing and waiting. A violinist was performing nearby. A photographer was on hand to capture that moment when Lewis dropped to one knee. When the couple turned around, Rousseve saw that their closest friends and family members had witnessed the proposal.

On Feb. 24, 2018, the pair married at Loyola University’s Holy Name of Jesus Church. The reception followed at Kenner’s Chateau Golf and Country Club.

For their first dance, the couple chose John Legend’s “So High.” Of course, Lewis couldn’t resist singing along.

That said, the “quiet and shy” Rousseve never left the dance floor.

“Everyone was like, ‘You never sat down. Did you eat?’” she says. “But I knew I’d only get one night like this and I wanted to take full advantage of it.”