“We’re still getting married, whether you like it or not.” – Neil 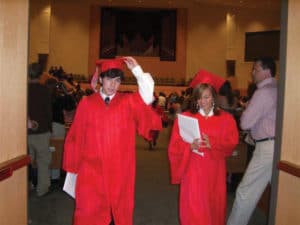 In 2004, Erin and Neil attended the same high school. Their paths first crossed during their Junior year with the two having a few classes together. Though they did not know each other well at that time, Erin says, “Neil always had a crush on me.”

During their Senior year, one of their class assignments was to be partnered with another classmate, be married to them, and raise a flower “baby” together. To Neil’s dismay, he did not get the chance to be Erin’s “husband”…at least not at that time. Erin says, “…after that point, he just kept telling me ‘we were going to be married’.” They were young and two different people back then, but, as fate would have it, they would meet again in time.

Six years later, at their High School Reunion, Erin says, “When I walked into the reunion, Neil was the first person I saw…I didn’t even recognize him as he looked completely different to me.” The girl Neil had told many years before ‘they were going to be married’, walked back into his life that night.

The couple danced all night and Erin says, “We were so much alike now, it was unreal…I couldn’t stay away from him.” After that night Erin and Neil stayed in touch and then soon began dating. One day they decided to reminisce and pull out their Senior Yearbook. As they turned to the back of the book, Neil had written to Erin, “We’re still getting married, whether you like it or not.” In her excitement, Erin says, “I immediately pulled out our Senior newspaper with our 10 year predictions.” There in black and white, was written, “Neil and Erin will get married in a Cinderella Fairytale Wedding.” As it turned out, the couple’s Wedding Day was 9 years and 7 months from the date of that newspaper.

A month later, Neil’s mom was sharing pictures with Erin from their family album. As they came upon pictures of Neil on Graduation Day, Erin says, “I was standing right
next to him..we had walked down the aisle together on Graduation Day!” Erin sums it all up as she says, “So I really believe that we were meant to be..that this was no accident, this was fate! He is my Prince Charming.”

When Neil and Erin first started dating, one of their romantic and memorable spots a swing at the Lakefront, looking up at the stars. Erin says, “One night he looked up in the stars and pointed one out. He said it was our star. At that moment I knew I loved him. Not too long after that night, he told me that he loved me too.” As Erin and Neil’s love grew, a year or so after that night beneath the stars, they began looking at wedding rings. While in search of the perfect engagement ring, Erin’s mother presented her with her Great Grandmother’s engagement ring for consideration as Erin couldn’t seem to find anything she liked in the stores.

Erin says, “I fell in love with it! It needed some fixing up, but it was perfect..I couldn’t wait for it to happen.”

Neil’s plan was to take Erin to dinner and then pass by their favorite spot, underneath the stars, on that swing at the lakefront to propose. So Neil parked his truck there. It was a cold night, and Neil told Erin he wanted to check the tide at the lake to see if it was good to go fishing. “As Neil stood outside in the cold waiting for me to get out,” Erin recalls, “it was too cold and I insisted on staying inside.” So Neil hopped back into the truck, looked at Erin with engagement ring in hand, and said, “You’re making it really hard for me to give you this…will you marry me?” She said ‘yes,’ and finally realized why Neil was trying so hard to get her to that swing. Erin says, “I think it was better this way. It was easier to see how beautiful the ring was. It looked brand new! It was perfect!”

They chose the Audubon Tea Room for their ceremony and reception on a summer evening in July with a color scheme of Tiffany Blue, pink, peach and white. Erin wore a modern “fairytale” style dress with a hint of blush as she walked down the aisle to wed her Prince Charming, Neil.

From Neil’s handwritten note on the back page of Erin’s Senior yearbook letting her know his intentions for their future together, to fate bringing them together at their reunion, a “Once In A Lifetime Cinderella Fairytale Wedding” magically predicted years before is now a “lifetime together” reality.