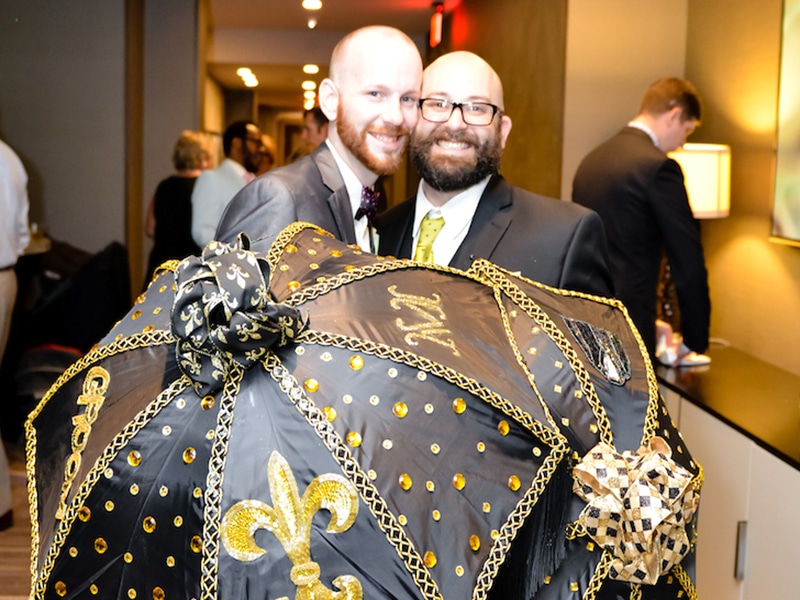 It is often said, “All that glitters is not gold.” Unless it is the wedding day of Mark Favre and Jason Picus, who decked out the Riverview Ballroom of the New Orleans Marriott in copious amounts of gold — black and gold, to be precise, for their New Orleans Saints–themed wedding. There was a hint of pink, too; their favorite color.

This was a dream wedding come true for Favre and Picus, the ecstatic winners of a contest that netted them a free wedding in the hotel’s opulent 41st-floor ballroom with a ridiculous view of the French Quarter and beyond.

A hotel ballroom bash wasn’t originally in the cards. Mark and Jason, who met on OkCupid and swore it was “love at first blind date,” were determined to marry in the Big Easy, where Jason is a proud fifth-generation New Orleanian.

Their only obstacle crumbled when the Supreme Court ruled in favor of marriage equality. Not long after, while in their pajamas and walking the dogs late one night, Jason spontaneously dropped to one knee under their favorite neighborhood tree and proposed. “It wasn’t planned. I didn’t have a ring; I had a moment of clarity. I looked at Mark, and I knew I couldn’t live without him,” explains Jason. “It was a perfect moment,” he adds.

They planned to make their union official with a backyard celebration — family, good friends, homemade gumbo and a couple of kegs. But then
they decided to share their love story on Instagram as part of the New Orleans Marriott’s #MarryMeNOLA Contest, dreaming of a wedding prize valued at $42,000 — a glitzy affair that would offer killer views from the hotel’s gorgeously renovated ballroom.

“I’m almost sad this contest is coming to an end,” wrote Jason in his last Instagram post. “The love and support we have received from our friends and family, nominating us and trying to help us win this wedding, will be something I carry with me for the rest of my life.”

It may have been that last post that sealed the deal, as Jason and Mark’s story ultimately captured the hearts of the judging team that selected them from among 312 entries as the winners. And if New Orleans is all about sharing the love, what better way to complete Mark and Jason’s love story than with a true NOLA wedding?

“Mark and Jason were a pleasure to work with,” says Lisa Pickett, the hotel’s event planner who helped them bring their wedding dreams to life. “It was so meaningful to them that they could get married in New Orleans since they love this city so much.”

With the help of Lisa and the New Orleans Marriott catering team, the couple’s 200 guests were treated to deliciously authentic cuisine, a tear-inducing first dance to Louis Armstrong’s La Vie en Rose, a love-themed flash mob planned by Jason’s sister, and a night of dancing to the couple’s favorite tunes by Louis Prima, Billy Holiday, Aretha Franklin and Beyoncé, culminating in a classic New Orleans–style second line. And just when it couldn’t get more magical, an unplanned but magnificently well-timed fireworks display erupted over the Mississippi River, thanks to a pyrotechnic conference that happened to be in town that weekend.