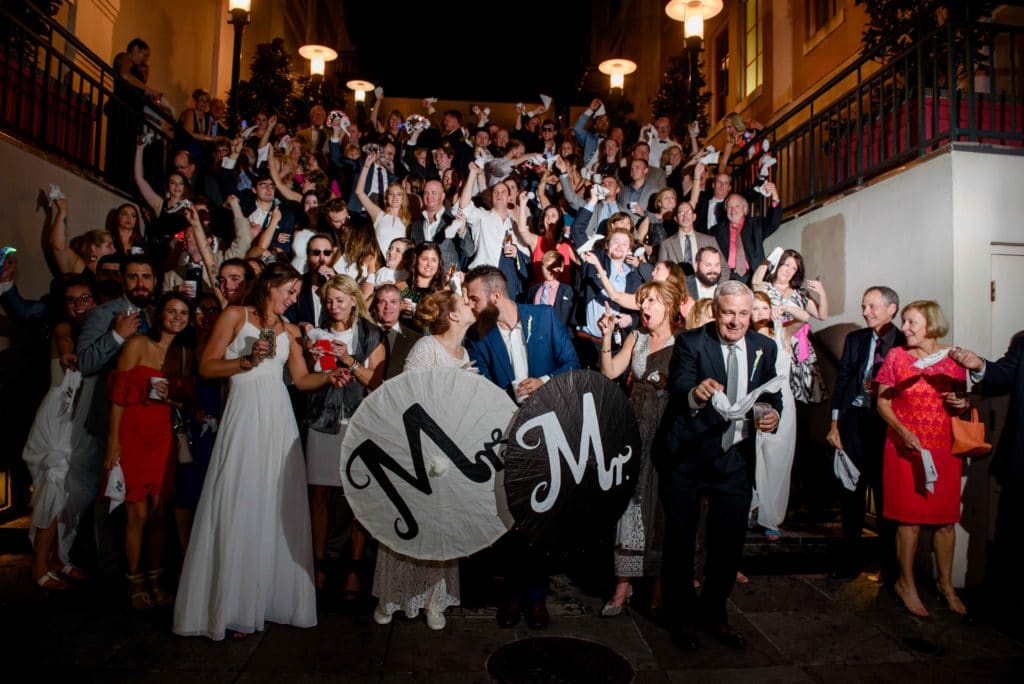 Emily didn’t expect to meet her future husband while going through freshman orientation, but as she was walking around campus with “from Houston” on her name tag, his family found hers. Jason’s family noticing the name tag struck up a conversation with Emily’s mother, because while Jason was living in Baton Rouge, he was born in Houston.

Orientation over and both Jason and Emily back to their respective cities for the summer, Emily’s mother encouraged her to reach out to Jason. After arriving on campus for the school year, they met up and started dating not long after.

Eight years of love later, Jason got down on one knee to propose to Emily at the Carousel Bar and it was only fitting that he planned a surprise brunch afterwards with friends and family at another bar, Cane & Table, as Jason works for the Sazerac Company and Emily works for Tales of the Cocktail.

Selecting their ninth anniversary for their wedding day, the couple made sure to incorporate their jobs in the bar industry into their wedding theme, including having a His & Hers cocktail bar, with Sazerac for Jason and Sazerac Royale (topped with champagne!) for Emily.

“We wanted very simple decor so we focused on candles and different size bottles and jiggers,” Emily says.

While they wanted to make sure that their family and friends were involved with the wedding, Emily and Jason took time to appreciate each other.

“We took half an hour after the ceremony to stop and eat dinner alone,” Emily says. “As much as we loved being with all of our friends and family, the quiet moments were very special. It allowed us to stop and take everything in.” Celebrating their union and love in the city of jazz, Emily and Jason created a day that was the perfect to start their happily ever after. “We had a lot of guests from out of town so we wanted everything to feel very New Orleans and to represent us as a couple,” Emily says. “Fun and not too fancy!”