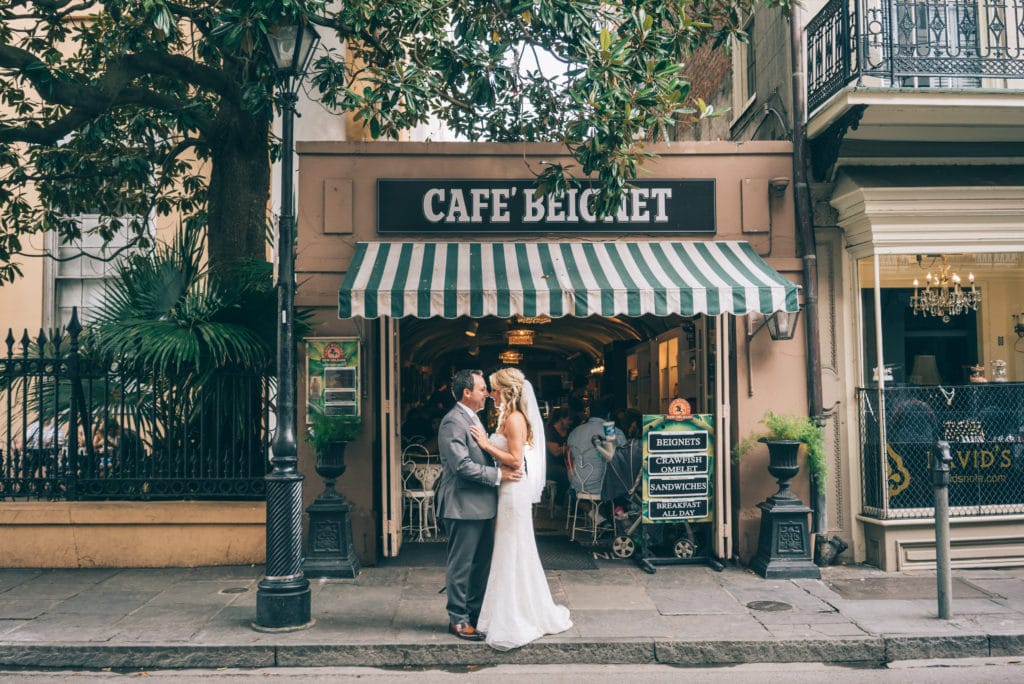 From Florida to the French Quarter.

Annette and Carlos met through mutual friends, and it didn’t take long for their friendship to grow into an enduring love for one another. As time passed, Annette’s daughters Elle and Ava created an amazing bond with Carlos. The girls were excited to be included in helping Carlos with a surprise proposal, as he put on his tuxedo, played  their favorite song, “Lucky,” by Jason Mraz and Colbie Caillat throughout the entire house. On a random weekday in December, Carlos got down on one knee as the girls stood close, clinging to their mother with excitement. Annette said “Yes!,” and they danced in front of the Christmas tree.

The couple resides in Orlando, Florida, but Annette’s hometown is New Orleans. They began planning an amazing destination wedding. Most of Annette’s family lives in New Orleans, and many of their close friends flew in from Orlando to celebrate their “wedding weekend” which began with a Welcome Party the night before the big event. Their guests were not disappointed with a full itinerary of scheduled events!

The next day, the couple was ready to say “I do.” Surrounded by their closest family and friends, they said their vows in the courtyard of the Royal Sonesta. Annette had a special ring bearer pillow made with his parents’ wedding day photo, and the couple shared meaningful gifts with the two girls.

After another second line parade, Annette and Carlos chose “I Cross My Heart,” by George Strait, for their first dance together, a loving moment between them as if no one else was in the room.

Then the party began, with non-stop dancing, drinking and eating delicious New Orleans food. Artist Alex Harvie amazed all as they watched him create a Live Event painting throughout the night, capturing the many special moments on canvas for Annette and Carlos to cherish forever in remembrance of their big day. Family, friends and those who had never partied in NOLA, all agreed it was a weekend they will never forget.

Annette and Carlos chose to celebrate their love as a family by including Elle and Ava on a trip to the Virgin Islands, which they called their “Familymoon”!